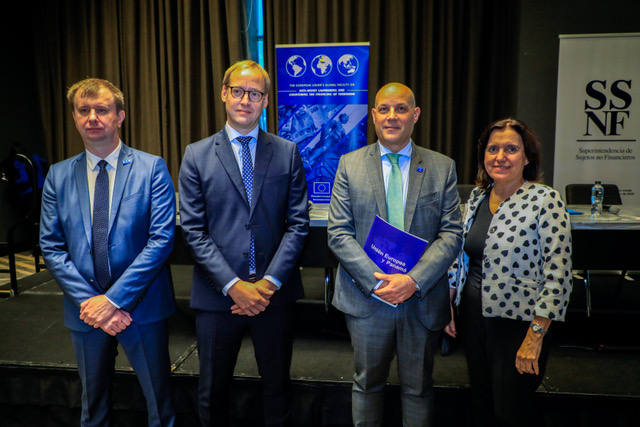 Panama City, 10-13 October 2022 – A capacity building training on “Implementation, Management and Use of the Beneficial Ownership Registration System” was delivered this week by the EU Global Facility on AML/CFT in cooperation with the National Commission against Money Laundering, Financing of Terrorism and Financing of the Proliferation of Weapons of Mass Destruction (CNBC) of Panama and the Superintendencia de Sujetos no Financieros, as part of a program aimed at supporting the country’s sustained efforts to strengthen its AML/CFT system.

Opening the weeklong event, the Vice-minister of Finance of Panama, Jorge Almengor, stated: “ “We reiterate our country’s commitment, which is shown by our concrete actions to strengthen the money laundering and terrorist financing prevention system,”. Almengor highlighted that the presentation of the Guide is generated as part of the implementation of Law No. 129 of March 17, 2020, which creates the Single Private System for the Registry of Final Beneficiaries of Legal Entities and its regulatory Decrees.

Vice-Minister Gordón emphasized that “(The) initiatives such as this Guide, are part of the fundamental building blocks of the regulatory and operational reforms which allow us to guarantee the integrity and transparency of all legal persons and arrangements throughout the country, in accordance with the international standards which we have committed to ».

For its part, the SSNF underlined the importance of the work undertaken by Panama and SSNF over the last few years to achieve delisting from the FATF list. “It has involved the establishment of a legal framework in line with international standards, but also the development of tools to assist the private sector and resident agents in their work of identifying, verifying and registering beneficial owners,” explained Dayra Carrizo, Superintendent of SSNF.

She added: “The effectiveness of the mechanisms put in place in Panama depends on the commitment of all stakeholders, and noted the importance resident agents are playing in the institutional set-up of Panama for which they are a key component. These workshops aimed to strengthen the basis for coordination between these stakeholders which commitment is paramount for Panama to be able to demonstrate the effectiveness of the measures taken to ensure the availability and accessibility of BO information in Panama.”

Over the course of four days, more than 500 participants attended the training onsite and online.

“This demonstrate the huge interest and commitment in the subject matter, and is the materialisation of the efforts undertaken by Panama with regards to its compliance with the Financial Action Task Force’s (FATF) requirements related to transparency of legal persons and arrangements, amongst the most challenging FATF Recommendation, and one for which the effectiveness of the measures taken is likewise most difficult to establish and demonstrate,” stated Alexandre Taymans, Key Expert on Beneficial Ownership for the EU Global Facility.

Experts from the SSNF and the Global Facility delivered sessions covering a wide range of topics including the FATF and EU standards, the newly published SSNF’s Beneficial Ownership Guidance, the practical functioning of the Panamanian BOR, the role and strategy of the SSNF to guarantee compliance with the Beneficial Ownership identification and registration requirements. The sessions also included various case studies and examples that fostered discussion between participants on how, in practice, beneficial owners should be identified and their information verified.

Close Menu
We use cookies to ensure that we give you the best experience on our website. If you continue to use this site we will assume that you are happy with it. Privacy policyI agree