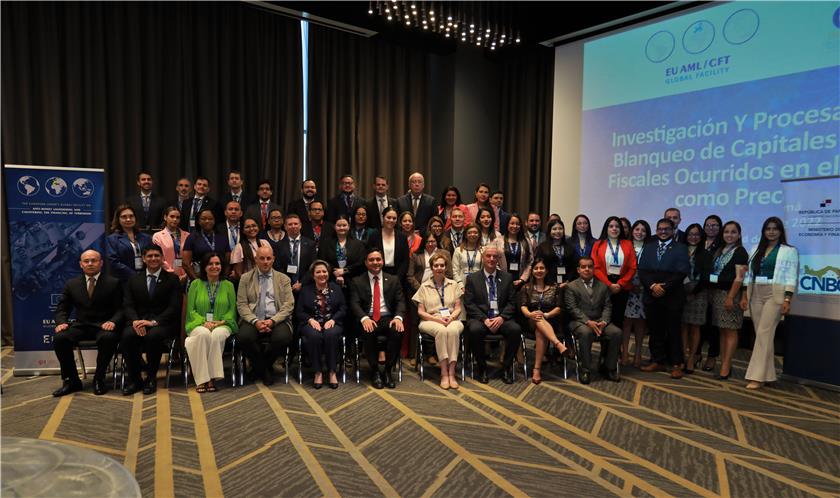 Panama City, 10 October 2022 – The EU-funded Global Facility on AML/CFT on Monday launched a series of training on anti-money laundering and counter-terrorist financing (AML/CFT) in Panama City, which aim to support the country’s efforts to enhance its AML/CFT system.

Co-organised with the National Commission against Money Laundering, Financing of Terrorism and Financing of the Proliferation of Weapons of Mass Destruction (CNBC) of Panama, the training will span over the course of three days, targeting some 50 participants from various Panamean entities.

Experts from Andorra, France, Germany, Ireland, Spain and Ukraine will deliver sessions on the topic of tax crime committed abroad as well as the importance of international cooperation in combating those crimes.

Opening the event, the presiding magistrate María Eugenia López Arias highlighted such an important event and thanked for sparing no effort in designing and implementing this training and support program, in obtaining a product made to measure for the needs of our country, taking into account all the angles that are generated by the inter-institutional participation required by the effective war against money laundering and the financing of terrorism and weapons of mass destruction.

“The Republic of Panama, without a doubt, is determined to sharpen the pencil in its strategies and rectify the deficiencies, so that the crimes and activities of money laundering are investigated and their authors prosecuted and subjected to effective, proportional and dissuasive”, maintained the presiding magistrate.

For his part, Vice-minister of Finance of Panama, Jorge Almengor, stated:“Panama has the capacity to investigate and prosecute tax crime commited abroad, as well as to provide constructive and timely international cooperation. Since Panama considered tax offenses as a predicate offense of ML in 2019, various investigations have been initiated, generated either by the use of UAF products, international cooperation, the Task Force or by the Public Ministry based on the Action Protocol. This reflects the good inter-institutional coordination and effectiveness of our system.”

The training is part of a series of activities organised by the EU Global Facility to support Panama in strengthening its AML/CFT frameworks and upholding its compliance standards in this regard. More specifically, the technical assistance focuses on Panama’s fulfilment of the immediate results 5 and 7 of the Financial Action Task Force as adapted to the needs and priorities established by Panama.

“Organised crime and terrorism threaten our peaceful coexistence and it is on the basis of national and international collaboration that we must combat illicit movements of capital under a clear and joint vision, based on the experience of the international organisations that promote a state of welfare and justice,” said Adolfo Campos, Charge d’Affaires a.i. of the EU Delegation to Panama in his welcoming remarks.