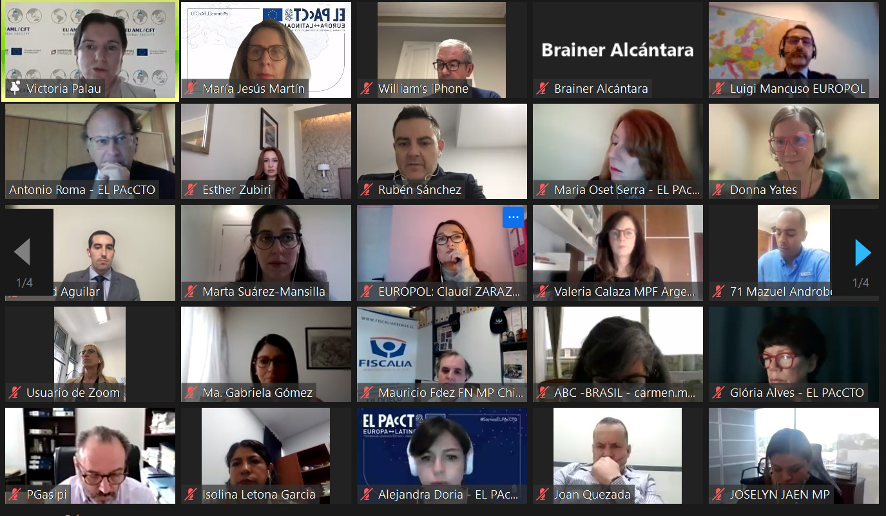 The EL PAcCTO Project and the EU Global Facility on Anti-Money Laundering and Countering the Financing of Terrorism jointly organised a webinar addressing the topic of terrorist financing and the illicit trafficking of cultural property. More than 100 representatives of Latin American and European Union institutions involved in this type of crime participated in the webinar, which involved 12 specialists from Argentina, Spain, Panama and Peru took part in the webinar, together with representatives from Eurojust, Europol, the Council of Europe and the United Nations.

The three experts introduced the characteristics of the illicit market in cultural godos, outlining these conclusions:

Coordination between institutions to combat a complex crime

Terrorism is a global problem and organisations are financed by various means, one of which is the illicit trafficking of cultural property. This is a crime with a particular modus operandi but which can coexist with other crimes such as arms trafficking or human trafficking.

Illicit trafficking in cultural property is fought through intelligence and information, with investigations and subsequent prosecution, but customs is often the first agency to identify the criminal activity. For this reason, Panama’s customs director insisted on the need for coordination between institutions, and for the importance of dealing with the issue from a multidisciplinary point of view.
From the police point of view, experts from the Guardia Civil, the Spanish National Police and Europol presented successful operations such as Operation Pandora and Operation Harmakhis against the illicit trafficking of cultural property. For their part, Europol experts highlighted the importance of the online market, which has grown in recent years. They stressed a the challenge online markets represent for security forces.
Representatives of the Public Prosecutor’s Offices of Argentina and Peru outlined their experience in the fight against this type of crime. Neither country has specific cases of terrorist financing, but other crimes such as money laundering linked to trafficking in cultural property do exist.

International experience and harmonisation of legislation

At the European Union level, the Eurojust agency intervenes proactively, always at the request of judicial and prosecutorial authorities, seeking international coordination between jurisdictions in cases with a transnational dimension.
The United Nations focuses on new trafficking routes such as the use of the Cocaine Route that links the Sahel with Latin America to traffic cultural goods. Therefore, there is a risk in Latin America with critical points such as Panama, Ecuador and Colombia.
Together with the representative of the Council of Europe, they emphasised the need to harmonise legislation on this type of crime to facilitate the investigation and prosecution of offenders. In addition, the Council of Europe presented the Nicosia Convention for the Protection of Cultural Heritage, which has so far been signed by seven countries worldwide.