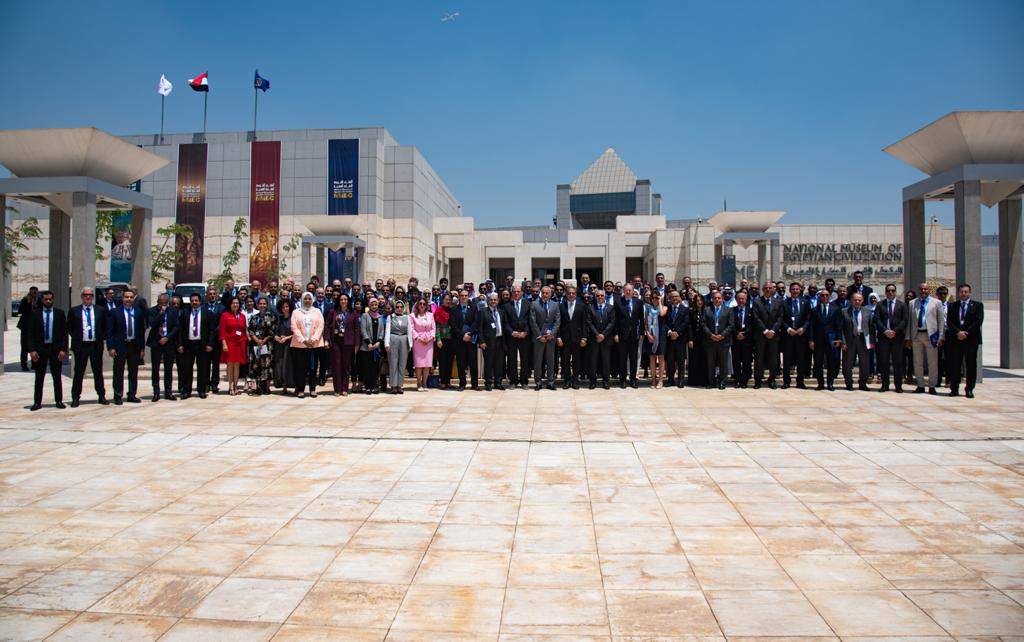 Cairo, 14 June 2022 – Participants from 14 countries of the MENA region on Tuesday convened in the National Museum of Egyptian Civilizations of Cairo, Egypt, to partake in the “Regional Conference on the use of AML/CFT in the investigation of Art and Antiquities Criminality” organised by the EU Global Facility on Anti-Money Laundering and Countering the Financing of Terrorism (EU GF-AML/CFT).

Held under the patronage of the Egyptian Anti-Money Laundering Unit (AMLU), the three-day event is witnessing the participation of some 90 high-level participants from MENA, the EU and international institutions such as UNODC and Interpol.

In his opening remarks, Dr Khaled El-Anany, Minister of Tourism and Antiquities of Egypt, stressed the importance that the Egyptian state attaches to raising the value of its cultural property and increasing awareness of the value of its cultural heritage, citing the unprecedented budget dedicated to the field of antiquities and museums in recent years, which allowed for the opening of the National Museum of Egyptian Civilization among others.

“Illegal trade in cultural property is one of the most important challenges facing Egypt, like many countries of ancient civilizations in the world, and it is no secret that the market for art and antiquities, besides being an arena for the illicit circulation of cultural property, it is also an ideal arena for money laundering,” he stressed, highlighting the “State’s obligation to protect, preserve, and maintain antiquities, and recover what was seized from them, as well as the prohibition of gifting or exchanging any of them, and considering the attack and trafficking in them a crime that does not fall under the statute of limitations.”

“There is a high correlation between the increase in art trafficking and organised crime. In the past years, Egypt has taken numerous measures to identify, investigate and tackle this type of trafficking,” said Judge Ahmed Said Khalil, Chairman of the Board of Trustees – AML/CFT Unit of Egypt.

He added: “Over the past 7 years, 29,000 antiquities have been recovered by the Arab Republic of Egypt, in collaboration with relevant entities and institutions in partner countries including France, Germany, Jordan, the US, Mexico (among many others).”

The first in a series of four regional conferences to be organised through 2024, the event will consist of a series of presentations by international experts on money laundering, terrorist financing and illicit art trafficking, as well as a hands-on case study examining the routes and and methodologies used by criminal networks involved in the looting or theft of antiquities and art.

“Today’s conference is an important building block in fighting criminality in art and antiquities.  The EU Global Facility is a crucial project in the fight against ML/TF in all its forms, including the trafficking of art and antiquities. With the presence of delegates from 14 countries, the EU and the UN will certainly bring a wealth of experience in art and antiquities investigations. More importantly it will allow identifying potential solutions and recommendations to be brought to the next conference,” said Christian Berger, EU Ambassador to Egypt.

Ultimately, the conference will aim to build the capability of both public and private sectors to share information, identify problems and solutions to this type of crime. It also seeks to raise awareness of the issues, and increase the capability of all actors involved to reduce and counter the ML/FT penetration of these lucrative markets and protect a country’s heritage.